It’s been a while since we’ve given you an insight into some of our dev practices here, so the release of Pre-Season 4 Man vs Beast seems like the perfect time to rectify that and run through the creation of a whole new character. Introducing Jack!

Voiced by Star Wars, Home and Away star, and all-around lovely guy Jay Laga’aia, Jack marks our first new hero since launch and joins Rosy as our second Enforcer on the Extinction Unit roster. While Jack shares the same class as Rosy, allowing him access to the same heavy weaponry, we wanted to make sure that he supported a very different gameplay style while remaining true to the core of what an Enforcer is.

With Rosy, the intention was to create a character that performs the Enforcer crowd-control role by fortifying an area and keeping enemies at a distance through the use of her Static Barrier ability. With Jack we wanted to do essentially the opposite, encouraging players to get right in the thick of the fight, and his toolkit was shaped around that. Charge gets him in the fight quickly, carving a path through the horde while his passive, Scrum Down, keeps him alive once he’s there and his Kinetic Converter acts as an explosive finisher to a fight.

Through Rosy, we already had a lot of the design language in place for our Enforcers so it was a case of finding a look that players could tell Jack belonged to the same class while also communicating the differences in character and gameplay at a glance.

As mentioned in a previous Dev Diary, Mutated Nature, our heroes are ‘soldiers by necessity’ so we needed to find a backstory and life for Jack before the dinosaur invasion. Being a hard-hitting brawler we quickly landed on Jack being a full-contact sportsman in his previous life. 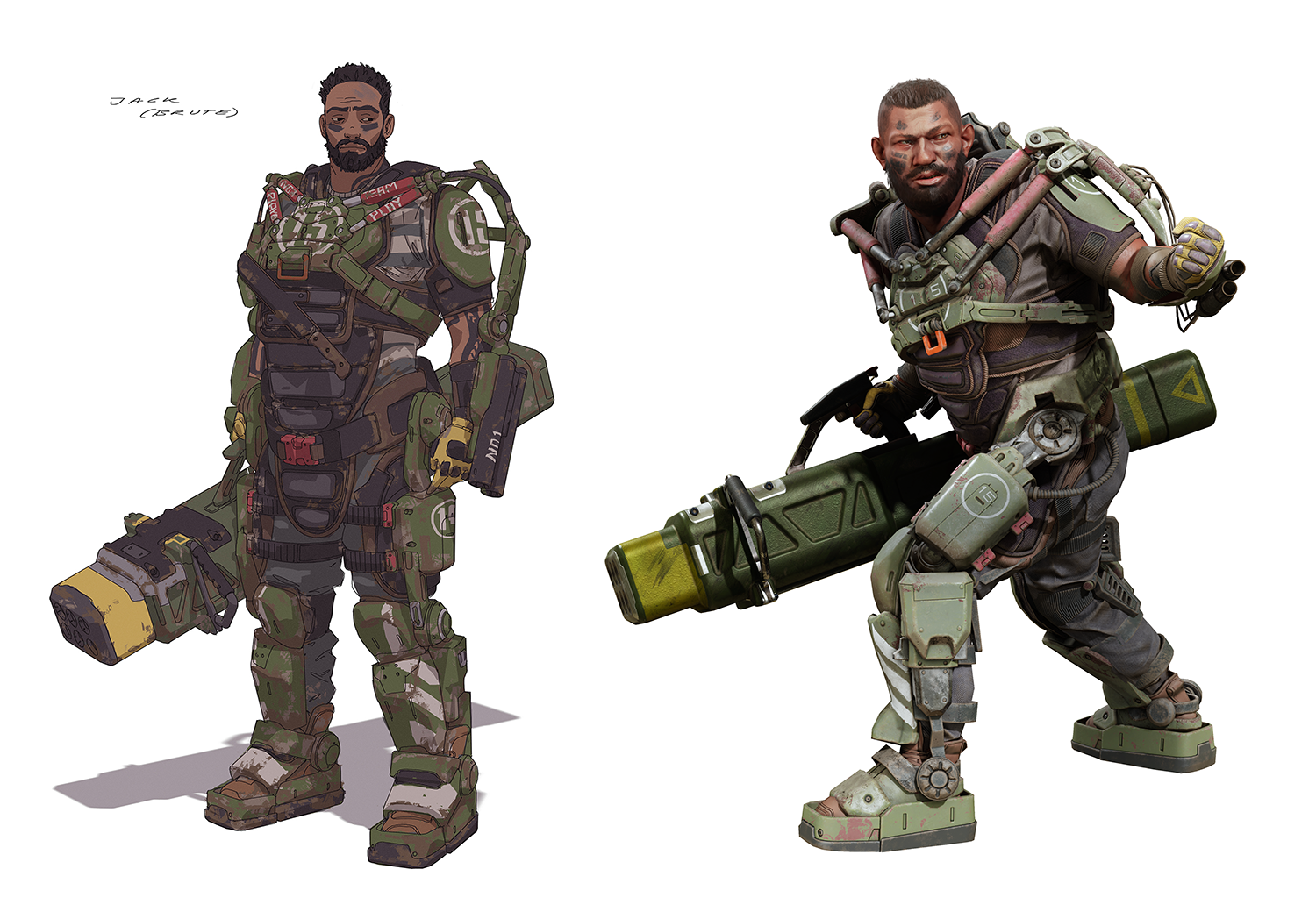 With the heroes of Second Extinction, we make conscious efforts to try to draw reference from real people and steer clear of the Hollywood action hero standard often seen in video games. The fight against the dinosaur threat encompasses all of humanity and we want our heroes to reflect that.

Our Art Director, Kristofer Ling, would use a technique where he gathers a collection of three photos of interesting faces that fit the bill for a character. These act as anchors for the character with the face of our new character lying somewhere in the middle of the triangle they form. 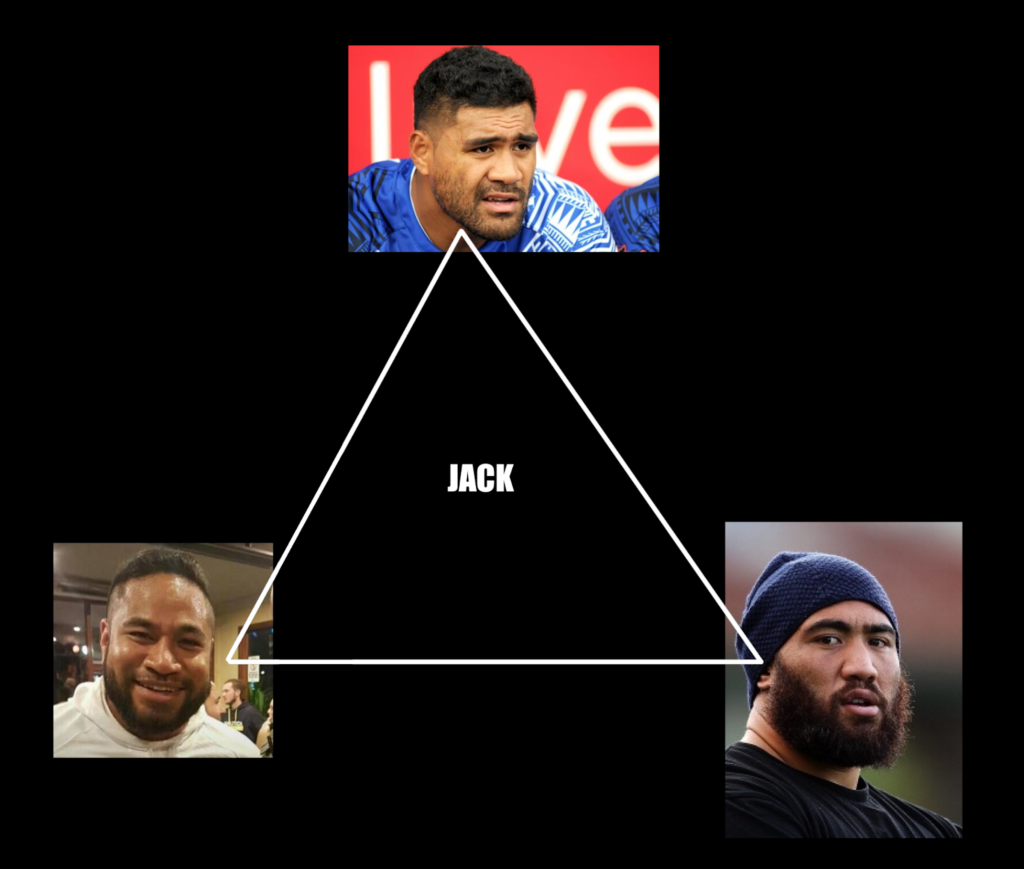 Early in development, we assumed we would use face scans, a common game technique where a rig of multiple cameras are used to take pictures of a real person’s face from multiple angles before converting them into a 3D model. It’s a very powerful tool but you are limited to the faces immediately available to you, a restriction made more profound by a pandemic. Luckily, Martin Carlsson, the artist responsible for all our in-game human character models, proved to get excellent results nearly as quickly by hand-sculpting them. This meant that the faces of our characters belong specifically to them making them feel more unique and specialized to our game.

While this is going on, the Design, Code, and Animation team make a headstart on prototyping and proving out the abilities. This stage takes the basic description in the design document and gets it implemented in its most basic form.

In the case of an ability like Charge that description is kept quite straightforward;

‘On initiating the ability, Jack begins to accelerate. On making contact with an enemy or object it is knocked back and Jack has a chunk taken off their current speed depending on the mass of the object. If Jack has enough speed remaining, they continue moving, if not they are stopped and briefly staggered. Releasing the ability button returns Jack to normal control after a brief recovery’

As with anything in game development, however, there are always complications to overcome that only come apparent after the first time it is in-game.

Looking at this version you can already tell there were some solid and satisfying foundations but that there were also some very immediate issues we had to work on and start tackling.

The immediate point we focused on was that we didn’t feel the power behind the ability. A lot of this was down to the fact that Jack was literally gliding through enemies with little to no resistance. While on the surface this could have shown that Jack is crazy powerful to be able to toss raptors aside like dolls, it actually ended up underselling the action. The main take away was that the enemies felt light not that Jack was the powerhouse we intended him to be. In the next pass we added a number of elements to address this;

It’s not a bug it’s a feature!

From here on out, it was a case of playtesting and balancing. Usually, this is done by bug fixing and taking off the rough edges, but sometimes you get little gems and opportunities squeezing through. In our case, we had a bug where hitting an enemy during a charge would refill your ability meter. This was obviously a bit much but it gave us the idea to have a little bit restored with each hit, allowing players to prolong their charge with skillful play.

I’m a little biased but I love playing with Jack and can’t wait for you all to get hands-on with him and let us know what you think. As always we’re still in active development so if there are any questions or feedback you have then please get in on our Discord action and let us know.