I’m Apel, Character/Creature Artist here on Second Extinction. I’ve made most of the dinosaurs in the game, and today I’m going to talk a little about what goes into creating one!

My work starts with deciding what the dinosaur or mutation will look like since we currently don’t have a dedicated concept artist on the team. I enjoy concept art a lot, so it suits me just fine. The Game Designers usually have a list of requirements of what they need: weak points, what kind of attacks they should be able to do, whether it’s a mutation or a base dinosaur, where it can be found, and all those things inform the decisions I make. I look at many real-life animals for reference and reconstructions of the dinosaur in question to get the shapes right. 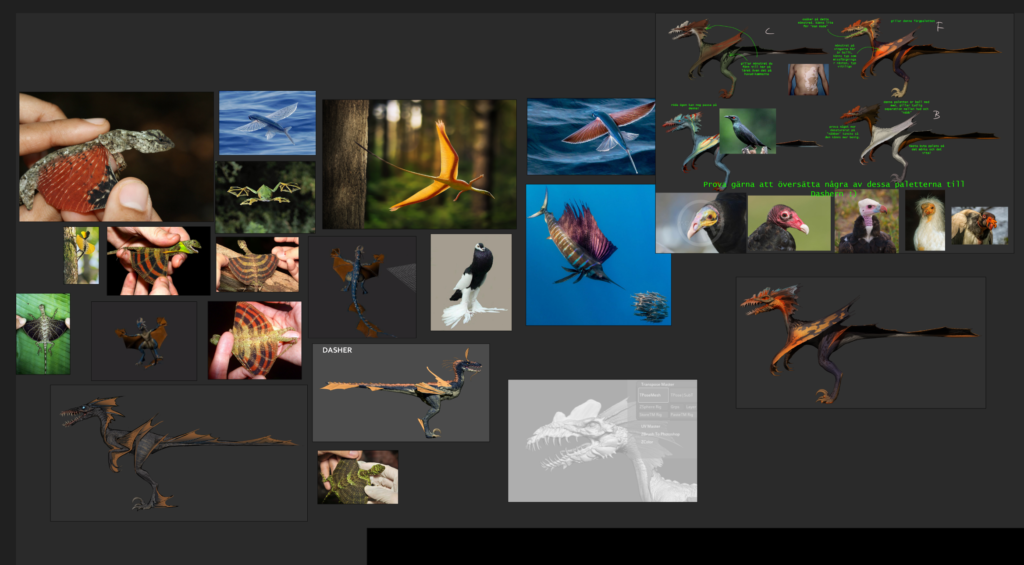 Reference images for the Dasher Raptor

Now, this game is not meant to depict accurate dinosaurs – they are mutated evil dinosaurs, but I’m always pleased when I’m able to make the model at least somewhat resemble its real-life counterpart. When the concept is finished, I start sculpting a high poly model – a 3D model in super-high resolution, way too high for any game to run – and that model is used to make the textures later. Sometimes I also make a block out or “proxy model”: a model with simple shapes and almost no detail that the riggers and animators can start using before I finish the final version. 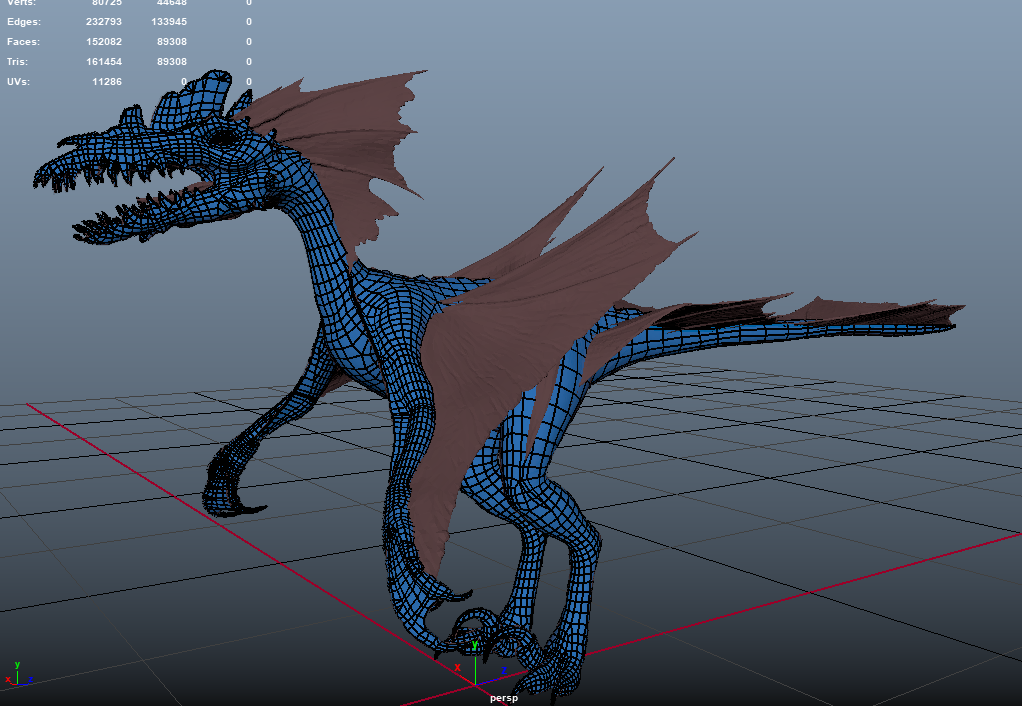 High poly and low poly versions of the Dasher Raptor .

The high poly is usually the part of the process that takes the longest time. Since the high poly model is too dense to use in the game, I need to make a low poly version. That is done by taking the high poly and building a kind of “shell” around it, capturing the big shapes and details, but instead of having 40 million polygons, the game only has to deal with around 15-25 000 of them, depending on size and complexity of the dinosaur. However, I still want all those details I spent time on in the high poly, so when I make textures, the high poly mesh is projected onto the texture maps, capturing all the little wrinkles and scales and gnarly bits that are too small to be modeled in the low poly. 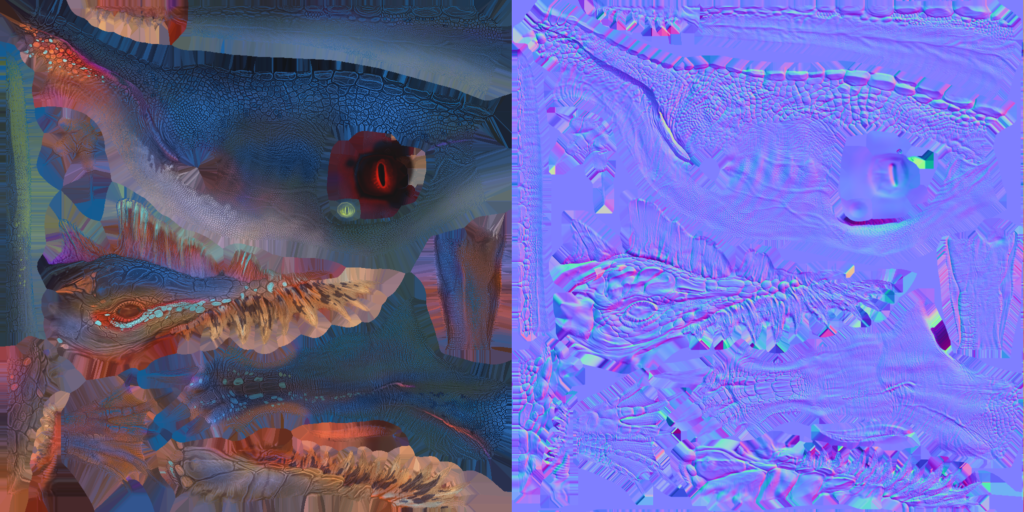 Last but not least, it’s time to do the texturing. Projecting the high poly onto the low poly (called “baking”) is the first step and gives me a great base to work from. The next thing to do is colors and patterns, and adjusting specularity and roughness, to make the material feel realistic. The eyes need to be shiny, the mouth should feel wet, the feet get a layer of dirt, and so on until I’m satisfied with the final result. Through this whole process, I get feedback from my lead, and sometimes things change along the way – a dinosaur that didn’t have a weak point at first might get one, or the game designers come up with a new kind of attack that needs to be taken into account, and so on. When my work is done, the dinosaur is ready to be given over to a Tech Animator to be skinned and rigged, and then the Animators take over. 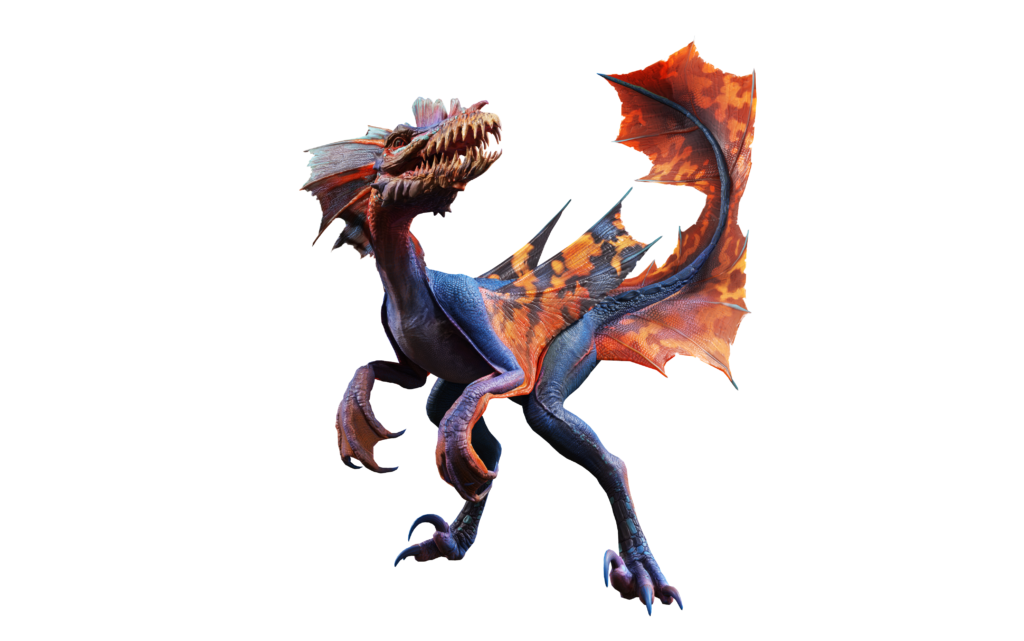 Thank you for reading!
Apel