A big welcome to everyone in our Xbox community and welcome to the crew. With both Xbox launch under our belt and Pre-season 4 out the door, it’s time to give an update from the team. As always, the State of the Game letter’s goal is to provide an open channel between you and us. Feel free to reach out at any time in the Discord, however.

Shortly after Pre-season 3, we started our initiative to set up surveys to talk about specific things in the game and get your feelings. The last survey was very much focused on Difficulty – how you felt about the game’s difficulty settings. This is the result: 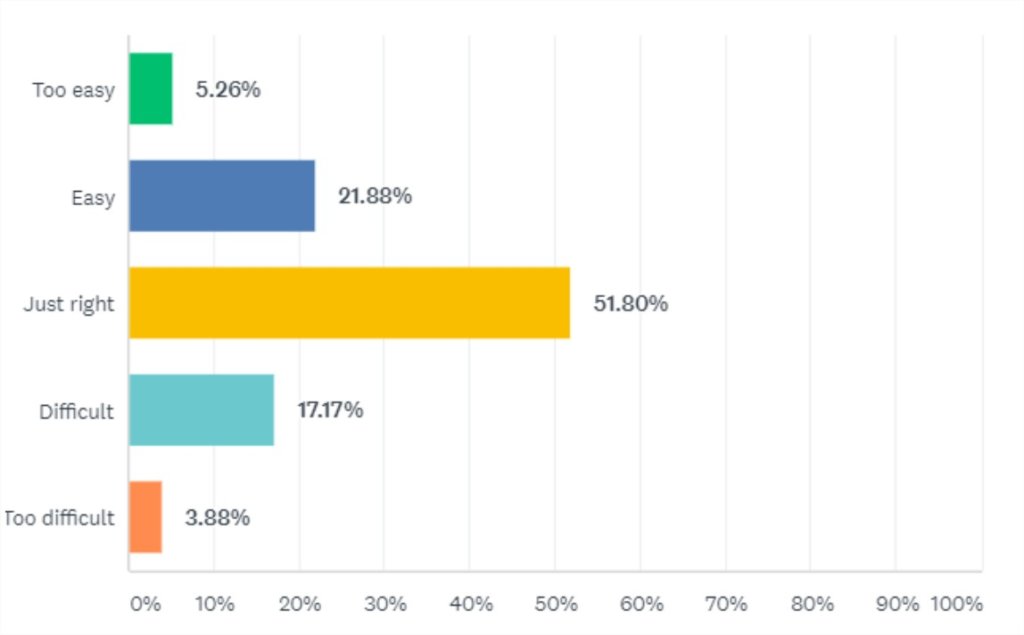 This is what we in the industry call a perfect bell curve.

To complement this survey, we also looked deep into our game data – what difficulty level do you play at, how successful are you. This information was crunched on a per mission basis per group size. 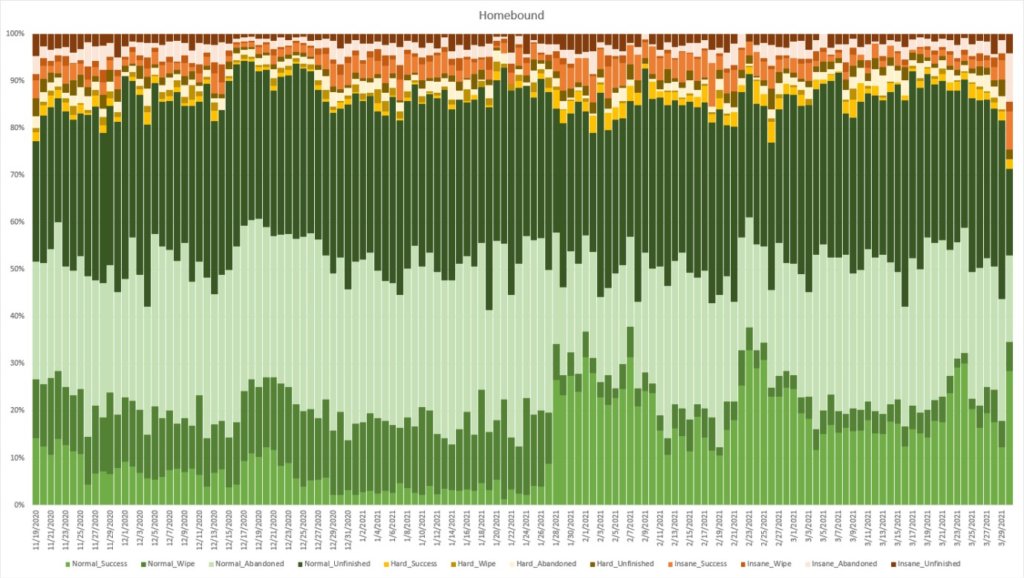 For people playing solo in Homebound, nearly 90% of all solo players went in on Normal difficulty… and weren’t very successful. But then, in Pre-season 3, we tweaked the difficulty settings, and you can see a much greater proportion of runs were successful (the bright green bars on the bottom).

At two-player parties, the colors begin to change: 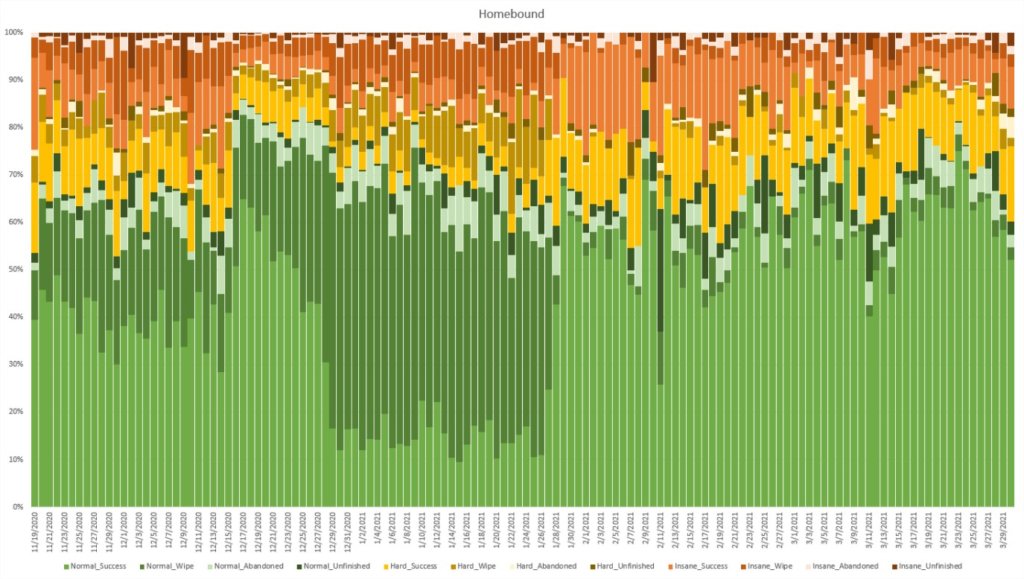 About 75% of 2 player parties went for Normal difficulty. As you can see, party wipes were extremely common across all difficulties (the medium green), but disappeared when we released Pre-season 3 and its updates.

Then with 3 players, you all did good – lots of mission success all over: 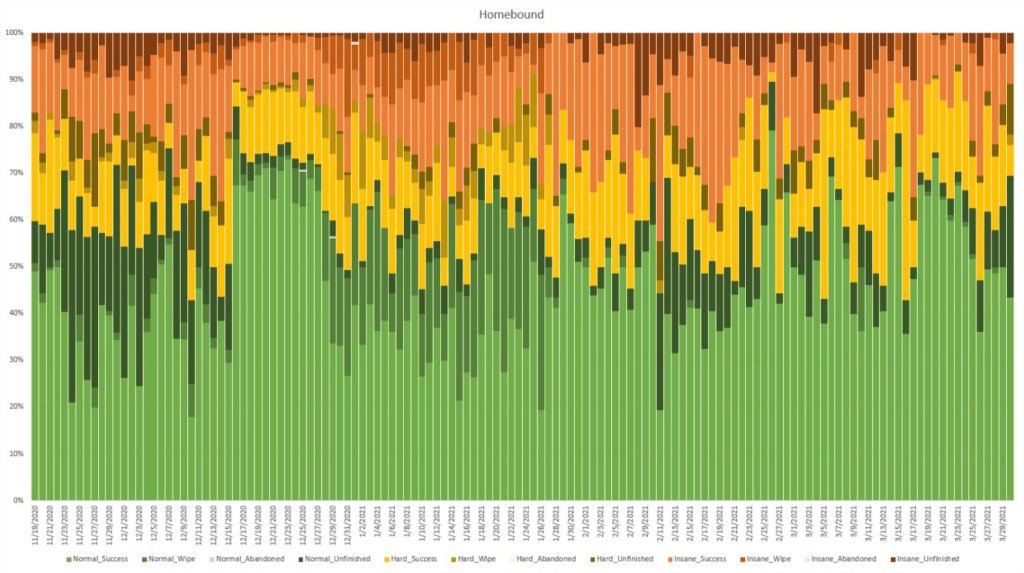 Still, however, a good 72% of the missions run were under the Normal difficulty setting.

Let’s dive into Expedition Mode:
Solo players loved Normal – with 75% of mission starts in this difficulty. 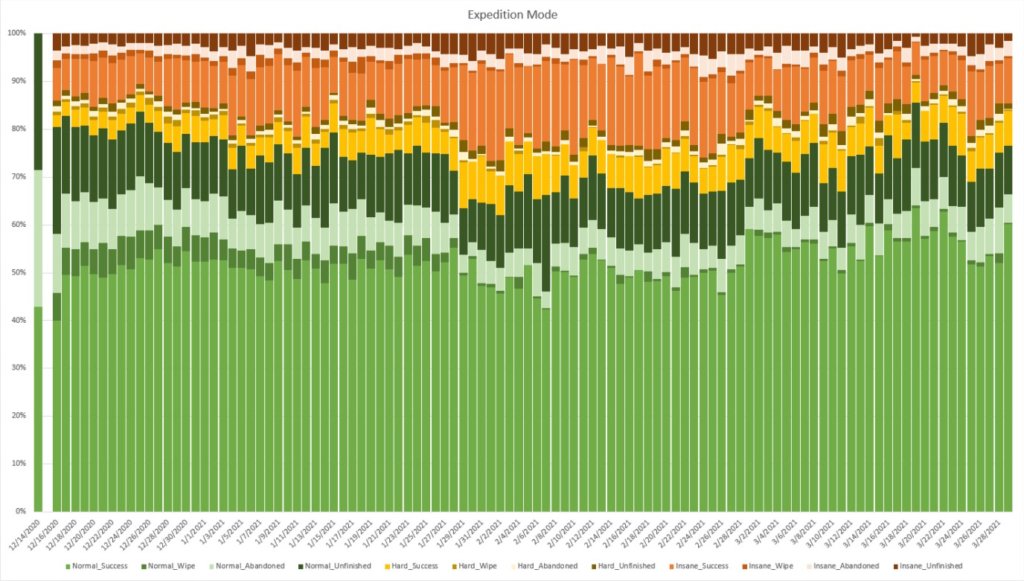 But the success rate before Pre-season 3 was a bit rough: 67%. After Pre-season 3, you were successful ¾ of the time! And you can see a bit more confidence coming in once Pre-season 3 launched, with a greater chunk of players trying out Insane. 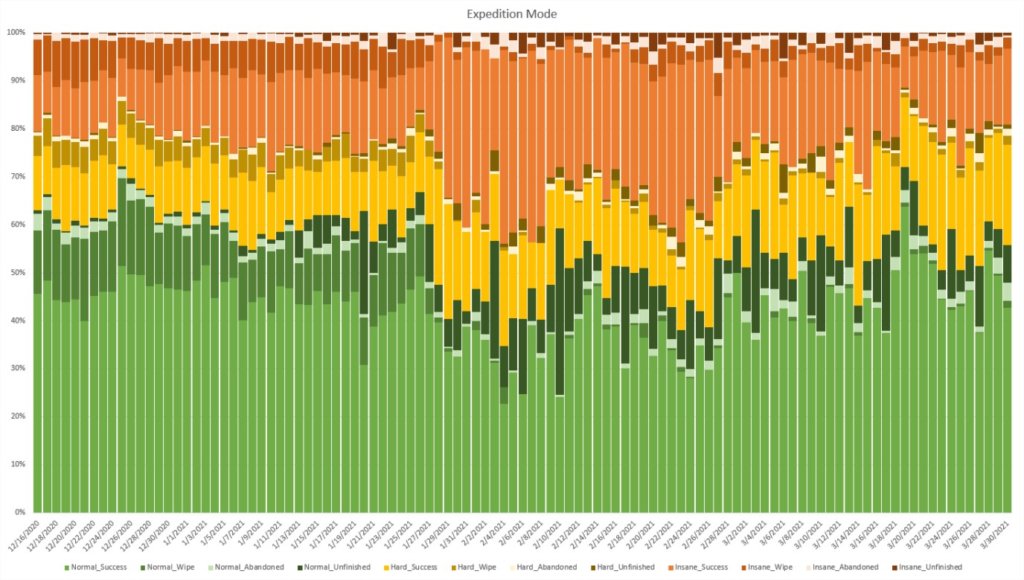 Success rates for Hard and Insane jumped 13% after Pre-season 3! You guys are good…
And then half the 3 player groups chose to go Insane: 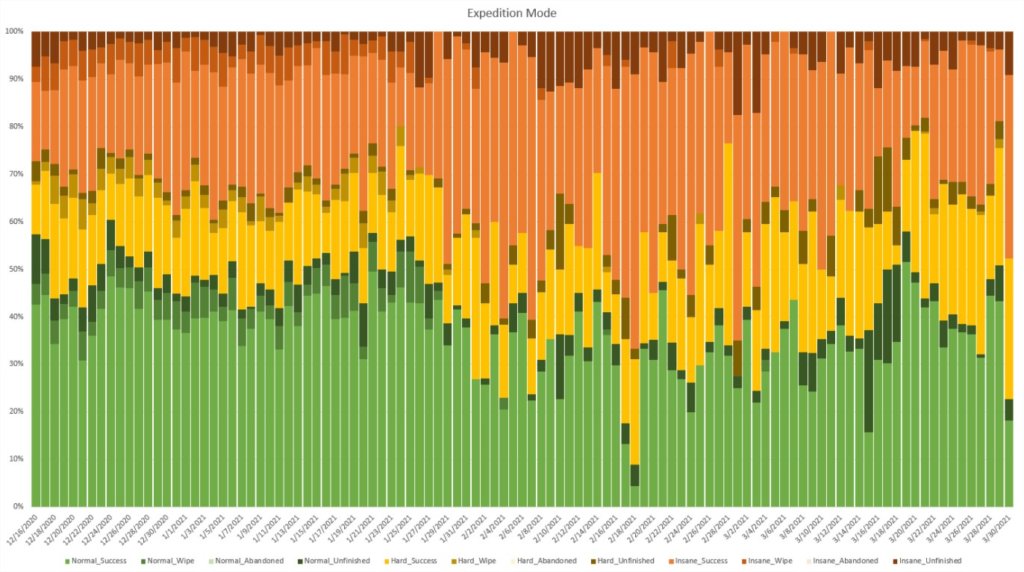 Where Insane actually had more popularity than Hard.

So what does this mean? First, we’re in a good spot when it comes to Difficulty in general. I don’t have enough space to go into each mission, but the results are pretty similar. Also, if you recall the State of the Game back in March, where we looked at the popularity of Expedition Mode, it was very popular with solo players. And now we can see that a significant proportion of solo players are playing in Normal and doing pretty well.

We will do another check-in on difficulties a little later when we get information from our Xbox players, but ultimately we’re in a good place.

Our attention has now turned towards more meta experiences.

First, matchmaking has suffered. We introduced matchmaking filters in a previous update, but we’re seeing that using those filters negatively affects actually finding a match, especially for Steam players. We’re looking into temporarily removing those filters in a future update so that it’s easier to get in the game even if it’s not running the mission you want to run. It’s temporary until the Lobby system comes into play in Pre-season 6, coming in September. Again, we encourage you to find others to play with in our Discord if you cannot find an adequate match ingame.

Hand-in-hand with this is problems around networks and disconnects. Hoo boy, yes we understand how rage-inducing it is to run a mission only to be kicked out and lost all the progress and stuff you just gathered. We are a peer-to-peer service (not driven by servers, in other words), so we are looking into ways that some measure of progress is saved if this scenario happens while also looking into ways we can prevent disconnects from happening at all. This is probably our top priority in the coming months.

We’re working on some small intermediate fixes while the big guns in the Pre-season 6 update are still charging up. Making solo play a little more forgiving is one such fix. We’ll let you know more when we get closer to those updates.

Second, we’re going to take a bit of a look into our rewards and loot items. There are cosmetic items in the game! Beautiful skins for your weapons and characters, but it appears we’ve been a little stingy in how we grant them. So, in conjunction with some gear preview improvements, we will see how we can make the game more rewarding with these customization elements.

Lastly, but certainly not least, we’re going to make some incremental progress on how new users interact with the game. The tutorial was our first big step; some early feedback we got from some players was that they didn’t understand what to do or how abilities worked, so the hope is that the tutorial helps.

Look out for an upcoming Dev Letter on the War Effort as well to fully explain this system.

And as always, we’re constantly working on improving the stability of the game. We have a Supply Drop #3 in the works currently to deal with feedback on the darkness of the game, on how night mode seems to be most prevalent, on problems completing Black Site and other contracts, as well as crash fixes and other bugs.

What We Want To Hear From You

In a week or so, we will ask you to fill out another survey about Pre-season 4 content. It’s not scary or designed to collect all your data for marketing purposes; it’s really to see how you like the tutorial and Jack. If you, as a new player or remembering your experiences as a new player, have any feedback on your first impression of the game or things that were difficult for you, I highly encourage you to fill out this survey as well as add your voice to the #game-feedback channel in our Discord. I read everything written there and endeavor to act on it quickly.

Things we have heard that are common issues (in addition to the ones above):

Some are easy fixes; others require a bit more consideration and investigation. But as always, any bugs that you experience are best reported directly to support so that they can be adequately prioritized and not mistaken for a suggestion.

Pre-season 2 contracts will be re-introduced with Supply Drop #3, so that PC players have another chance to complete them and Xbox players have the same opportunity! You will need to have finished Pre-season 4 contracts in order to start the new ones, and your previous progress would have reset. But I promise the dates are accurate this time!

Some eagle eyes would notice that the timeline for pre-seasons has changed in our latest iteration of the roadmap. We will be releasing updates to correspond with War Effort updates now. As a fun function of shifting those dates to fall on a Monday or a Thursday, it just means that a change of a day could mean a change of a month! So it’s nothing to worry about, no significant delays, just some calendar fun.

Again, a big welcome to all our new players, and we’re excited to have you as part of our community. Thanks for being with us on this Early Access journey, and please consider joining us in our Discord!