Like nature itself, the art of Second Extinction is both brutal and beautiful.

From the marauding, mutant dinosaurs to the eerily familiar scenic landscapes, they roam. From the bouncing fireflies to the chunky futuristic tech, our heroes have pieced together. There is a mix of old and new, seen, and undiscovered. The natural has been mutated from the familiar to the unseen and unusual. Yet it all feels grounded and somehow relatable. We’ve all seen shotguns and assault rifles. We’ve all seen paleo-artist interpretations of iconic dinosaurs. But not like this. Mutated and reinterpreted. Chopped and screwed for a new audience.

So how do you take all of these unique and disparate pieces and make them fit into the same world? How do you mutate the nature of things?

To answer that, we’ve put Lead Artist Kristofer Ling in the hot seat to answer some burning questions and tell us about his experience working on the project.

Let us start with the star of the show – the dinosaurs – how did you go about creating them, and where did you find inspiration?

We had early on decided that we were going to make “evil” mutated dinosaurs.
We didn’t want to be Jurassic Park in that the monsters you were killing should not feel like animals; they are monsters. We don’t want the players to feel sympathy for these creatures; it should feel good to blow them to pieces.

Early on explorations of the monster-dinosaur scale for our enemies

Then it was about where we want to put the enemies on the scale between monster and dinosaur. We wanted them to be recognizable as dinosaurs, which took Lovecraftian tentacle blobs out of the mix. The Vastatosaurus Rex from the King Kong movies was a reference we all liked because it was a dinosaur just more monstrous. On top of this, we also decided that we wanted our dinosaurs to be more colorful than what you usually see.

“We don’t want the players to feel sympathy for these creatures; it should feel good to blow them to pieces.” 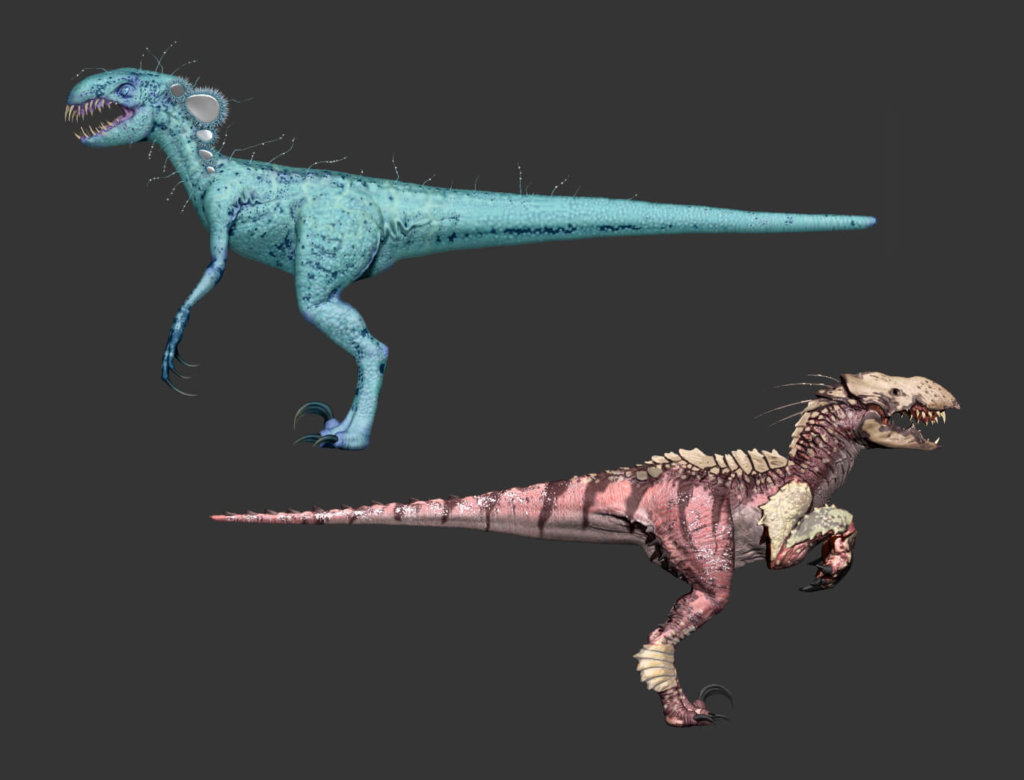 Final concepts of the Electro Raptor (top), and the Digger (bottom)

Our inspiration has mostly been taken from nature. The electro raptor was inspired by ocean living creatures like the cuttlefish and the mantis shrimp. The mole beetle inspired the digger, among other things, and the Rex took inspiration from large birds and koi carps. 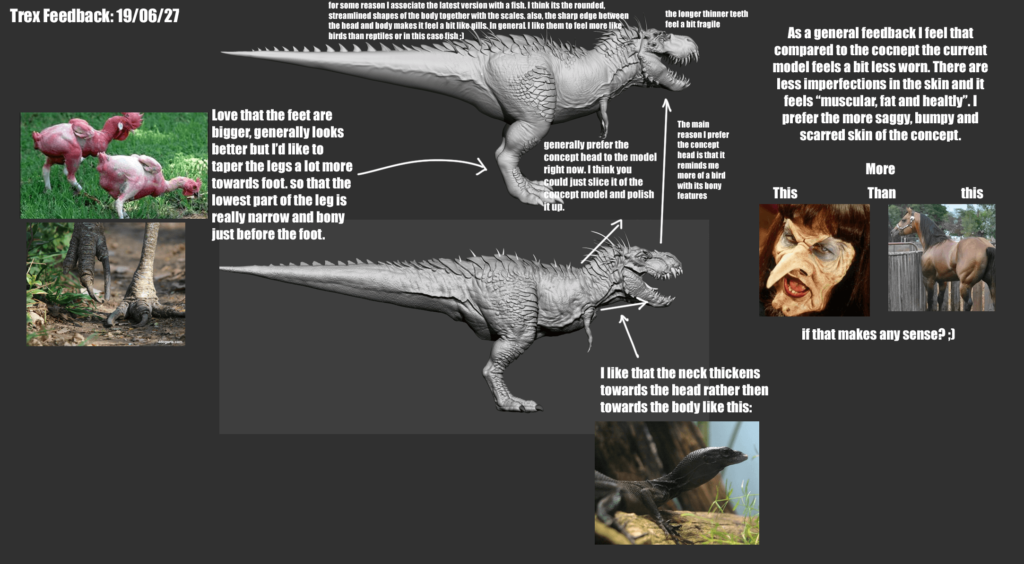 Part of the process in getting the Trex just right

Did you have to set any limitations when creating new dinosaurs?

There have been limitations, mostly caused by time. It’s a relatively small team. Many decisions around the enemies were mandated by what we can do, and how to get the most out of our time. For example, all of the raptors are based on the same skeleton so that we could reuse most of their animations, which in turn has limited how creative we can be with the look of these different mutations.

Other challenges we have been facing is bringing in a clear visual language to help the players understand our enemies. How do we signal a weak spot or armor? How do we mark destructible armor? These features are reused on many of our enemies, so they needed to apply to many different enemy types without making them look too same-ish or repetitive.

We’ve started receiving fan-made dinosaur ideas and concepts; is there anything our community should keep in mind when creating new beasts for the world of Second Extinction?

I love that people are getting engaged like that! That is precisely what we want. Ideally, a new enemy type needs to bring something new and exciting to the table both gameplay-wise and visually, so that would be my advice to budding game artists paying tribute to Second Extinction. Also, try to not only design what it would look like, but instead what the full experience would be when you meet one of these monsters. I would also recommend looking to nature for inspiration.

An early exploratory concept idea of our enemies

How did the process go in creating the look of heroes that can go head-to-head with mutated dinosaurs?

Like with the enemies, we did quite a lot of exploring at the beginning of the project to find the style of our player characters. The guidelines we ended up with was that we didn’t want generic soldier characters. We wanted real people with characteristics and personalities. It has also been essential for us to have a diverse range of characters to pick from in terms of gender, age, culture, and ethnicity. You can only take that so far with four characters, but that is something we intend to keep expanding on as we add more characters to the mix.

Narratively these characters all had lives before the dinosaurs took over the planet. They had jobs, families, and hobbies. We wanted all of that to come through somehow. These guys are survivors turned soldiers by necessity. 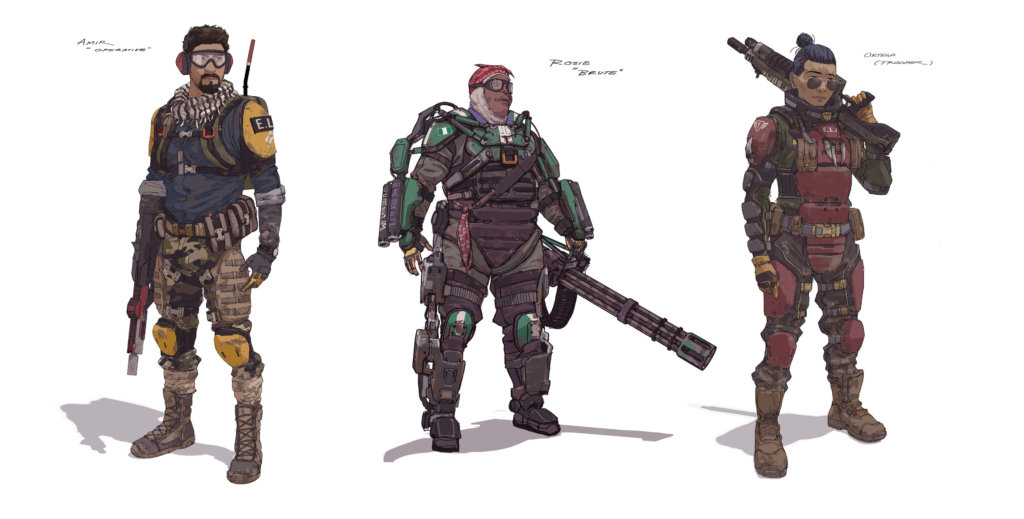 The final concept draft of our player characters

Another thing was that they are now kind of living in a post-apocalyptic world. They have relatively good access to gear. Both the existing equipment on the orbital station they live on and what is picked up from different locations on earth by sending people down to collect it using the dropships. However, most combat gear to be found is aimed to protect from bullets and other long-range weapons, not claws and teeth. We wanted their equipment to feel a bit like hacked protection gear from many different sources. Police/army gear mixed with sports gear combined with any other type of protective gear you might be able to find but put together by professionals.

“These guys are survivors turned soldiers by necessity.”

In terms of their weapons, how did you find your take on FPS classics like sniper rifles, miniguns, and assault rifles? How do character-specific weapons reflect the personalities of their owners?

The pairing of characters and weapons has primarily been done on the design team to create a nice and balanced range of exciting play styles and roles within a multiplayer unit.

When designing the style of our weapons, we had to take a look at how sci-fi we wanted to go; we are in the future after all. We decided that we wanted the weapons to feel modern but not futuristic. They shoot bullets, they are mechanical, and they go KABOOM! 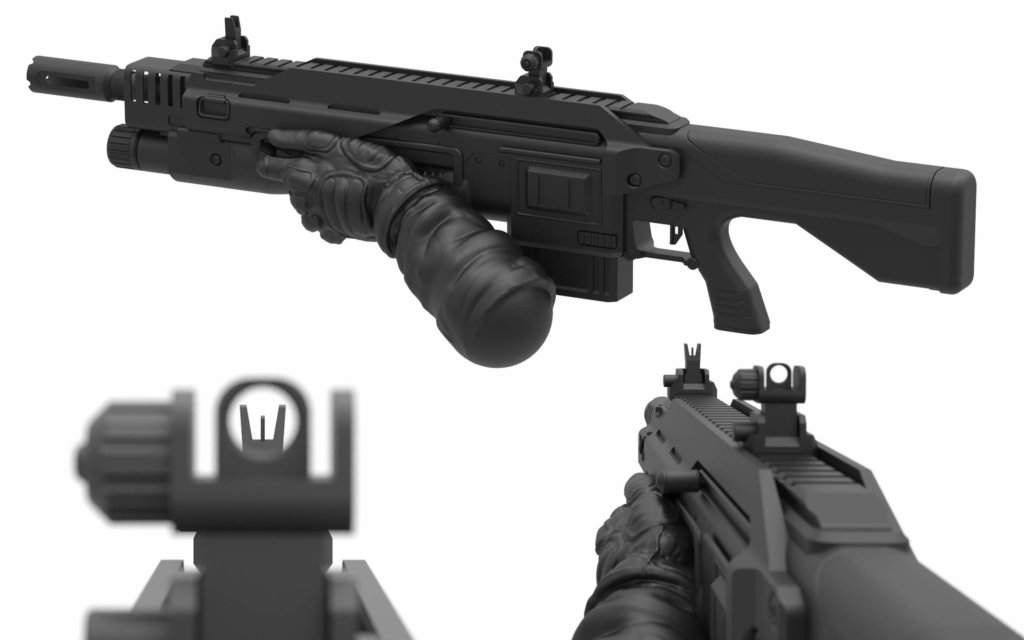 Unlike the protective gear for our characters, we decided that the weapons should not be hacked or makeshift. After all, a weapon designed to kill a human or blow a hole in a tank will be effective on a dinosaur. We did want to make sure the weapons felt brutal enough to take down a dinosaur, though, so we wanted them all to feel heavy, powerful, and a bit over the top.

The lighting in the game is moody and evocative – there’s a strong, intentional use of contrast and shadow; what was your philosophy for lighting?

Haha, I’m thrilled that this question is here because, as mentioned earlier, we are a relatively small team, and a new team brought together to make this game. We were all new to the Apex engine and the tools coming with it, so we had much to learn to get the most out of Apex. As a small team, we do not have a dedicated lighting artist either. Luckily, since we’re part of the Avalanche Studios Group, we got to borrow a bit of time from talented lighting artists within the company. They helped us sort out many big question marks, give us a good base in place and train our artists up to finish it off. Up until that point, I was worried that lighting would be a weakness for our game but I am really happy with how it has turned out. 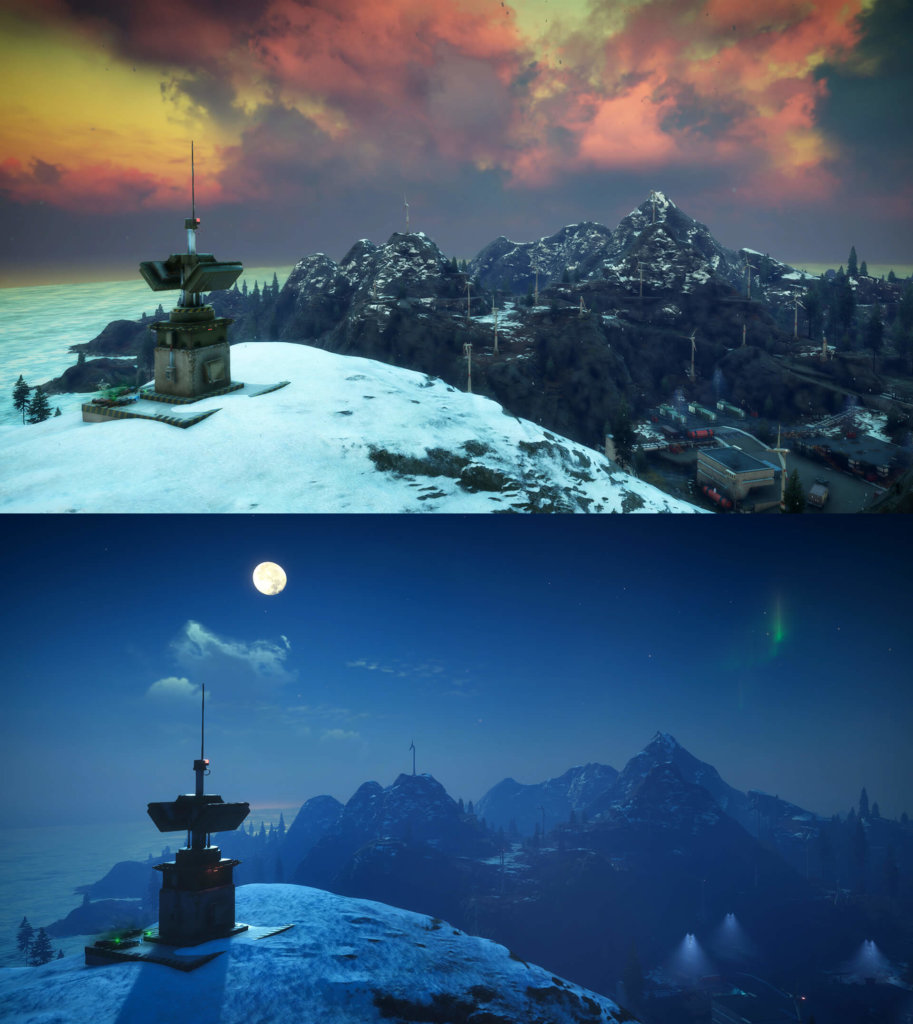 In-game screenshots showing differences in lighting during the day 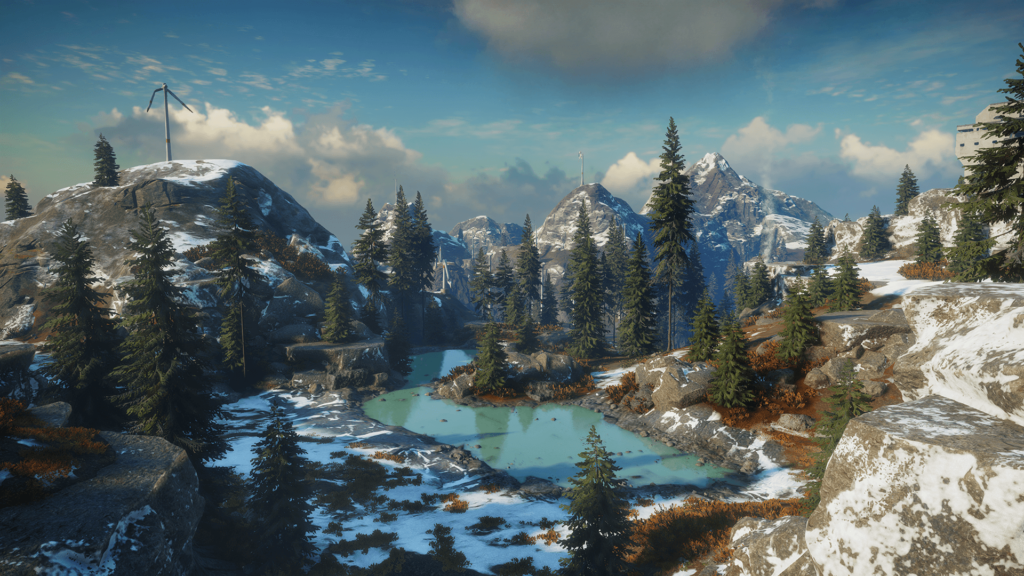 In-game screenshot of a sunny day

In terms of philosophy, I see lighting kind of like background music. You can bend the whole impression of something or how you experience it by just changing how you light it. Just like you can completely change how you experience a scene in a movie or a game by changing the music that goes with it.

I wanted our world to feel dramatic and a bit alien. Not making it surreal but taking it to the edge of reality. When we worked on the world lighting, we tried to be realistic without being restricted by realism.

“You can bend the whole impression of something or how you experience it by just changing how you light it.” 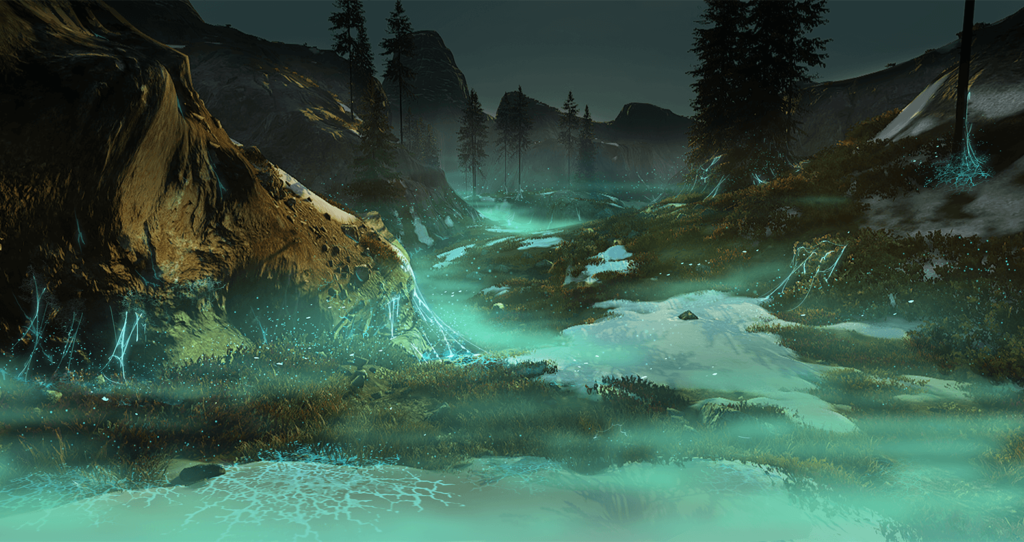 What has been your most fun or memorable experience when working on this project so far?

That’s a tough one. It’s been a wild ride. I think it has been to come into this new studio so early on and to have built this fantastic team that I’m so proud of—getting to know everybody and getting to know Systemic Reaction as a studio. Everybody has grown incredibly during this project. I know I have.

Is there anything you haven’t gotten the chance to design yet that you hope to do?

I’m very excited to see where this project will go once we release it to the public. We have our thoughts and plans, but a big part is for us to work together with the community. Where do you guys want us to take this next? 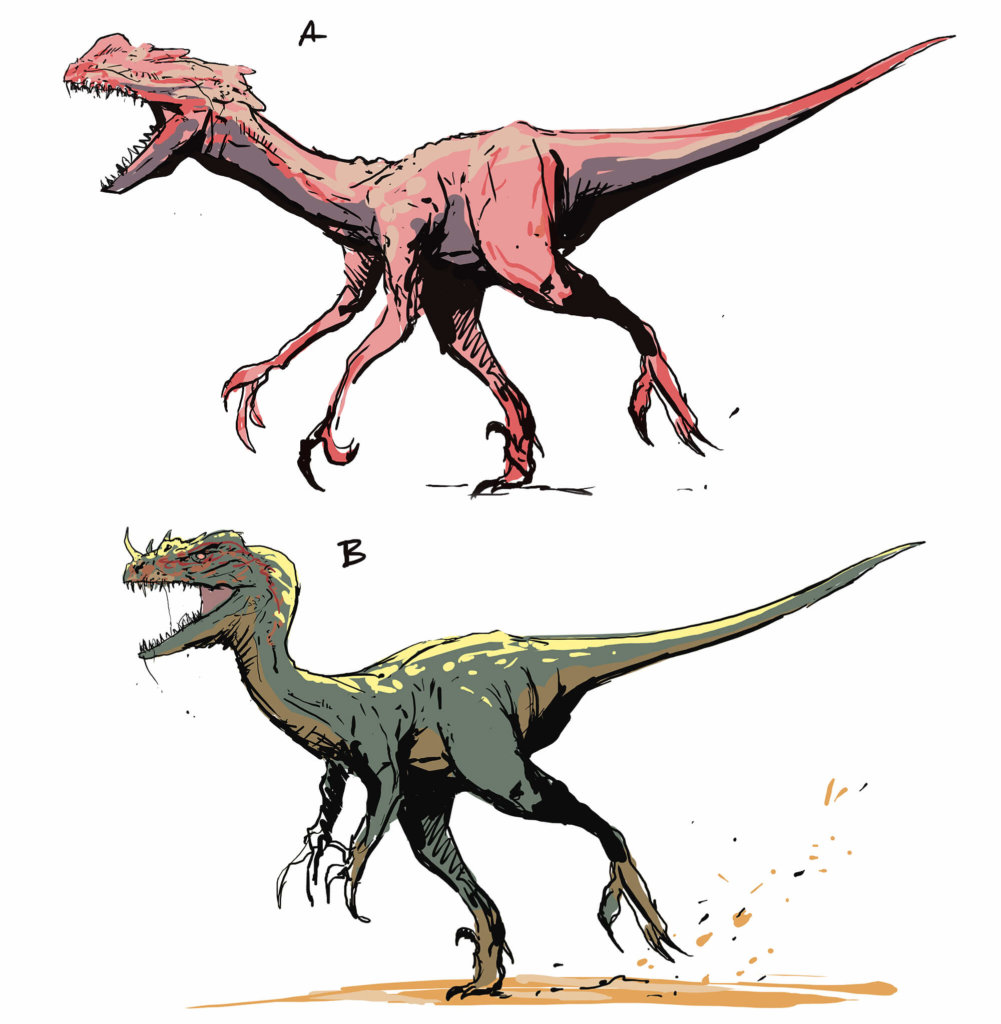 Early exploration sketches of our Raptors

I’m also super excited to start looking into more enemies; we don’t exactly have a shortage of ideas. I really can’t wait to dive into some of those. On the weapons side, having a look at where we go from here, maybe start looking at some more exotic stuff.

I’d love to explore more about the narrative and spend some time on environmental storytelling in future environments, which is quite resource-heavy to do well but is a lot of fun.

So many ideas, so little time… Haha.